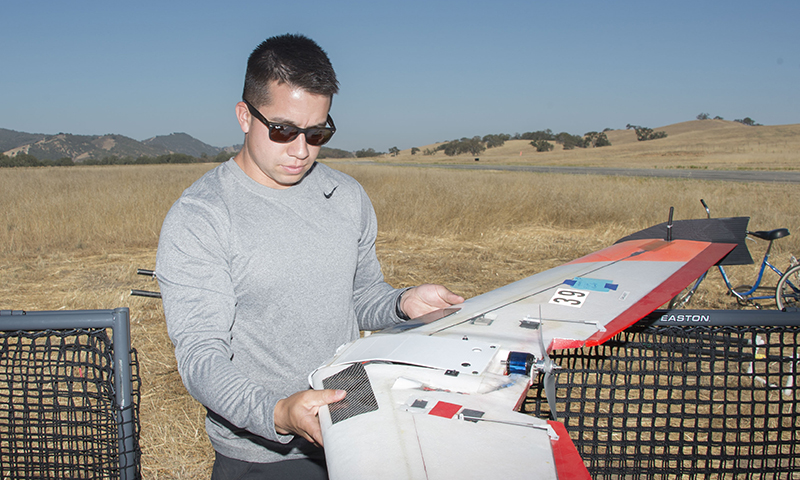 Cryptologic Technician (Technical) 2nd Class Edward Montoya examines a UAV prior to flight operations with NPS' Advanced Robotics Systems Engineering Laboratory (ARSENL) at Camp Roberts, Calif. Montoya and the ARSENL team received an Honorable Mention in the robotics and autonomous systems category of the 2015 Secretary of the Navy Innovation Awards.

"It's truly a great honor for ARSENL to receive this award," said Montoya. "This award speaks volumes about the caliber, commitment and character of the ARSENL team."

Montoya has been in the Navy for nine years. He came to NPS in November of 2012 and was assigned to work in the Radar Lab. However, due to his long-standing interest in robotics, he applied for and was given the opportunity to transition to the ARSENL team.

"When I first started working at ARSENL, there was definitely a learning curve, especially on the software side. However, the team was very supportive, and my background as a Cryptologic Technician (Technical) helped with the transition," he said.

In the lab, Montoya manages day-to-day maintenance and upkeep, software uploads, and recharges the UAVs. During the last 19 months, Montoya has helped build more than 50 UAVs in the lab, complex vehicles that require more than 30 mechanical checks, not to mention software updates and patches.

"One of the major accomplishments for the ARSENL team in 2015 was flying 50 autonomous UAVs simultaneously, breaking our own record of 30," Montoya said proudly, adding that he Iooks forward to finding new ways to help the team succeed.