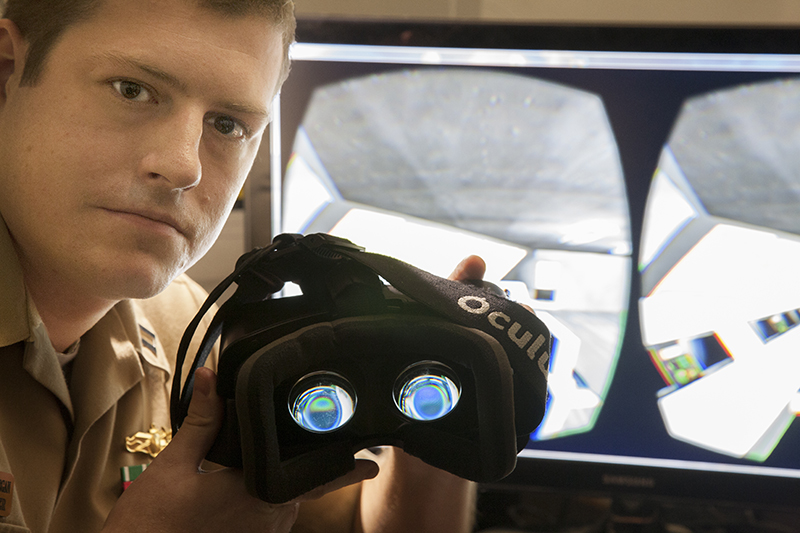 Former NPS computer science student Lt. Brendan Geoghegan, above, was named a Secretary of the Navy (SECNAV) Innovation Award winner in the Innovation Scholar Category, Feb. 8. He is pictured above with the Oculus Rift Virtual Reality (VR) head-mounted display that he used when researching the viability of augmenting a conning officer's visual field with an overlay of Critical Navigational Information (CNI).

I was very excited to have been nominated for the award. To be selected for it by the SECNAV team is above and beyond. It was a great project to work on and hopefully the excitement of utilizing AR [augmented reality] and VR [virtual reality] in the military domain does not fade away," said Geoghegan.

Geoghegan was honored for his work leading to an NPS thesis titled, "Navigational Heads-Up Display: Will a Shipboard Augmented Electronic Navigation System Sink or Swim?" He hopes that his research will lead to increased efficiency and safety.

"I realize that it will be many years before our conning officers begin donning headsets that aid them in their duties" said Geoghegan. "[But] just as 3D printing is drastically changing the way we maintain supply chains, economical VR is going to be a game changer in the way we test new warfare ideas, train sailors, and maybe even fight wars."

While Geoghegan is enjoying the well-deserved attention his work has garnered, he is also quick to thank the NPS faculty members that helped him along the way. Research Associate Professor Amela Sadagic and Geoghegan ran hours of experiments testing Geoghegan's thesis against seasoned ship drivers and navigators at the Surface Warfare Officers (SWO) School in Newport Rhode Island.

"I am especially grateful to Dr. Sadagic and [Research Associate] Perry McDowell for their work as my thesis advisors. Dr. Sadagic was especially involved as she ran the experimental study with me both at NPS and at Newport Rhode Island," said Geoghegan.

The SECNAV Innovation Awards were established by Secretary of the Navy Ray Mabus to recognize leading innovators within the Department of the Navy (DON) and to incentivize innovation. Also recognized by the SECNAV Awards Committee were NPS' Advanced Robotics and Systems Engineering Laboratory (ARSENL) and former NPS student Lt. Larry Clay Greunke, both of which received honorable mentions.