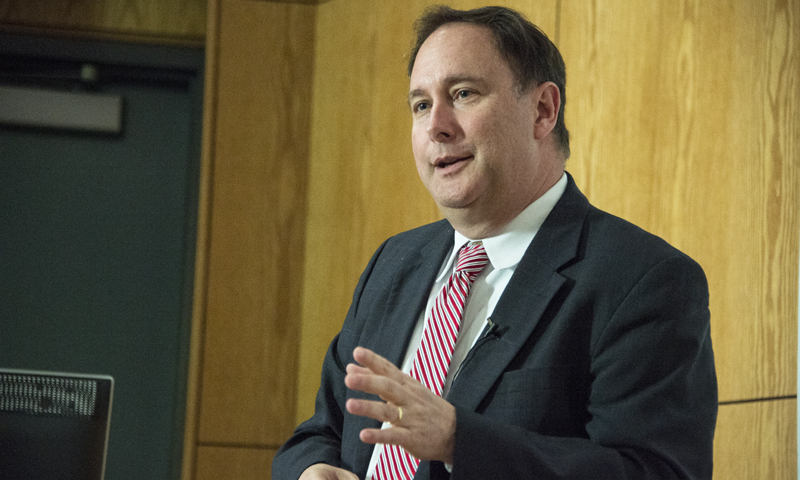 NASA's third highest-ranking official, Associate Administrator Robert Lightfoot Jr., speaks to an audience of NPS students, faculty and staff about the space agency's journey to Mars in the Mechanical and Aerospace Engineering Auditorium, Jan. 28. Lightfoot was brought to NPS by leadership in the Space Systems Academic Group (SSAG) to speak with students in the SSAG curricula.

"We've been on this journey [to Mars] for a long time, but it's very hard. We have very specific phases and milestones to cover to ensure the path is correct and safe," said Lightfoot, adding that January 28 marks the 30th anniversary of the loss of the Space Shuttle Challenger and its crew, including NPS alumnus Capt. Michael J. Smith.

"I would like all of us here to reflect on this anniversary of our fallen heroes, some of whom passed through NPS as students," said Lightfoot.

The roadmap to Mars includes technological breakthroughs by industry, Lightfoot said, and international partners that share resources and man current and future objectives in space.

"ISS was built on a bartering system of cooperation of sorts where we traded resources, and that included international astronauts to also live on the space station. And we look to continue the integrated vision and common capabilities we now share with our European partners," Lightfoot explained.

In his role at NASA, he also often finds himself in Washington, D.C., building leadership support for NASA's trek to Mars. Like many federal entities, NASA's journey to Mars will not only be challenged by science and engineering, but by austere budgets as well.

"The Apollo missions received four percent of the total federal budget at the height of that amazing program. Today, NASA has 0.4 percent to work several programs currently on our plate – that's one-tenth of the budget when compared to the late 1960s," he said.

In closing his presentation, he summed up NASA's mantra by offering one of his favorite quotes from NASA Administrator Charles F. Bolden. "NASA is not a history agency. We are a future agency," he said.