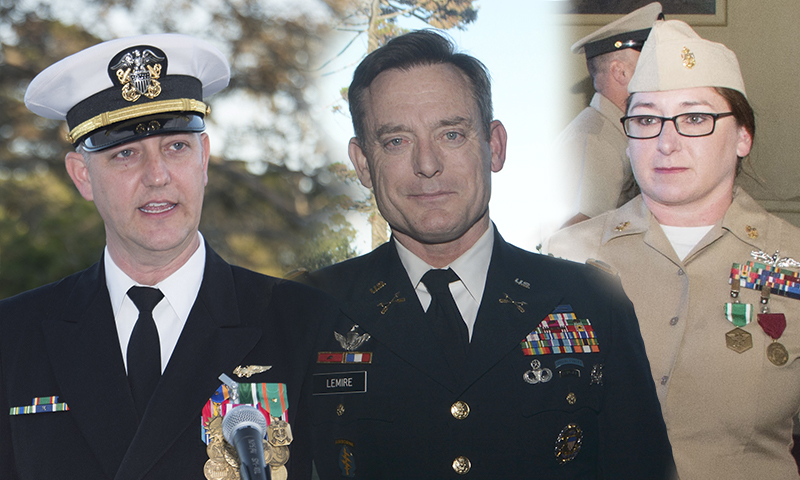 NPS bid farewell to three critical staff members this past week with the retirements of Lt. Cmdr. Eric McMullen, Army Col. Guy A. LeMire, and Chief Petty Officer Cassaundra Bastero, from left to right. Together, the three service members retire with a combined 76 years of active duty military service.

"Twenty-one years has gone by so fast. I would like to thank my family for their support, especially during all the holidays, birthdays and other events I missed over the years," said Bastero, NPS Assistant Safety Officer. "I'm so happy that I spent the last three years of my career here at NPS, which has helped me with my transition from the military. I encourage all the younger Sailors to get everything they can out of the military, and to develop ties that will last your lifetime."

Shortly following Bastero's morning ceremony in Herrmann Hall, Nov. 18, McMullen welcomed NPS colleagues, family and friends for his own ceremony near the Roman Plunge, where he shared with guests in attendance his appreciation for the opportunity to serve NPS.

"This place has been a blessing to my family, and I truly appreciate everyone coming to the ceremony to honor my family, and me," McMullen said, retiring following his tour as a Program Officer for the university's computer science and cyber curricula.

California native, LeMire, retired one day prior, Nov. 17, after 35 years of service. LeMire enlisted in the Army in 1981, commissioned as an Infantry Officer in 1990, and spent most of his career in the Special Operations community.

"I want to dedicate this ceremony to my step mom. I know she's looking down right now and she's probably saying something along the lines of, 'You know you're aren't superman, right, and the Avengers aren't real?," said LeMire, NPS' Special Operations Chair in the Defense Analysis Department. Pointing to his students in the audience, he continued, "Well, I'll tell you what, I may not be not one of them, but those young guys sitting in the back, those are our superheroes."