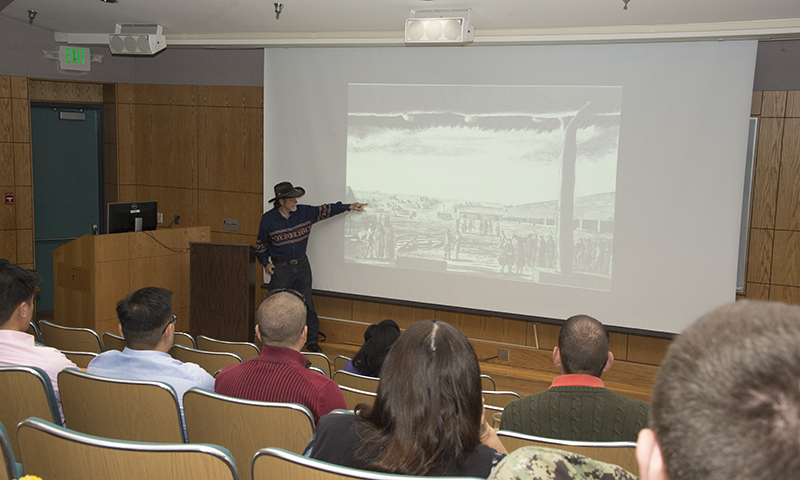 Gary Breschini from Archaeological Consulting offers a lecture on Central California's Esselen Indian tribe during the National Native American Heritage Month celebration, held in the Mechanical and Aerospace Engineering Auditorium, Nov. 17. The annual observance provides an opportunity to recognize the significant contributions the first Americans made to the establishment and growth of the United States.

"Today I would like to talk about the Esselen Indians. They lived just to the south of here, and were the one of least populous groups in California, and are still one of the least known about groups in the state," said Breschini.

Esselen territory encompassed mostly rugged terrain southeast of what is now the Monterey Peninsula, ­in the Santa Lucia mountains – inland from Big Sur to the upper Carmel Valley, and along the coast from the Little Sur River to near Lopez Point.

"We are often asked how the Esselen got here. The standard theory is they came across the Bering Sea … when water was 380 feet lower," explained Breschini. "But we have another theory. The first people that came down the West Coast did so by water craft … following the kelp highway," which runs from the Aleutian Islands off Alaska to the tip of South America providing a great source of food.

In the late 1700s, the local Indians' world would change drastically when European soldiers and missionaries established a presence in the region. Missionaries baptized Esselen tribe members, but left little records about the tribe itself.

"The first Esselen baptism occurred on May 9, 1775, and an estimated 1,000 baptisms occurring at the three local missions [Carmel, Soledad and San Antonio] over the years," said Breschini.

Between assimilation and disease, Breschini says the indigenous Esselen population was devastated, with an estimated 90 percent decline in their population. There remains, however, a definitive Esselen presence in the region, he says.

"In this area there are around 1,000 local descendants of local tribes," said Breschini. "They care deeply about their heritage, which the missionaries in large part took away. However, through research and in part through archeology we are able to learn more about their heritage."

Currently, there are 567 federally recognized American Indian and Alaska Native tribes and 26,995 American Indians serving in the Armed Forces, making up 1.2 percent of the military.