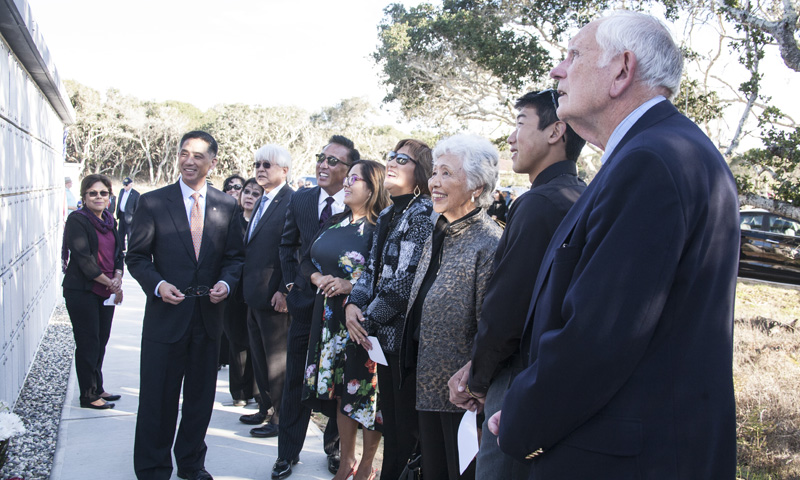 The family of deceased Navy Capt. Gordon R. Nakagawa gathers in front of the niche where his cremains now rest following an inurnment ceremony at the California Central Coast Veterans Cemetery, Nov. 4. An NPS alumnus and faculty member, Nakagawa was a strong voice of support among hundreds of veterans and local officials in the fight to have a veteran's cemetery created on the Monterey Peninsula. His urn now rests in columbarium one at the recently inaugurated cemetery.

"I am just pleased and relieved that he has been laid to rest at the California Central Coast Veterans Cemetery along with his fellow heroes," said widow Jeanne Nakagawa. "He was on an early committee that worked to have a cemetery at Fort Ord after its closing."

During the Vietnam War, Nakagawa's A6A Intruder aircraft was shot down over Haiphong, with nearly four months of imprisonment in the notorious Hanoi Hilton following. As a prisoner of war, Nakagawa suffered daily rounds of selective punishment, often more than his fellow prisoners due to his Japanese ancestry. With the conflict winding down, Nakagawa's captors released him in March of 1973, although he would later return to Vietnam to fly protective cover for the evacuation of Saigon in 1975.

Nakagawa did not only distinguish himself on the battlefield with his 185 combat missions, the NPS alumnus was highly regarded on the university campus as well. He returned to NPS to serve as Chair for Tactical Analysis, and was soon regarded as one of the best teachers among his students, and highly respected by fellow faculty. His commitment to community was unsurpassed, elected to the Monterey Peninsula Unified School District Board. He was also recognized as a California Association of Leadership Programs Leader, and earned several other community distinctions.

Nakagawa was a well-known lover of animals, and a dog whisperer of sorts as well – he was known to be able to train the most unruly of canines within minutes. His faithful Labrador, Maddy, was included as family in his obituary.

Nakagawa created another lasting legacy on the NPS campus as a Navy Distinguished Marksman, and served for many years as captain of NPS' Pistol and Rifle Team. Through his mentorship, NPS Marksmanship teams consistently won top honors in various regional and national Navy and Marine Corps competitions. Hundreds of Navy and Marine Corps officers maintain a debt of gratitude to Nakagawa's influence in earning their own Navy Distinguished Marksman and Pistol Medals.

At the final ceremony and tribute, Nakagawa's wife Jeanne, sons Greg and Steven and daughter Kathleen, along with friends and extended family, recalled cheerful memories of Gordon as they looked up at the niche where his remains were finally laid to rest, now able to join the heroes he knew in life.