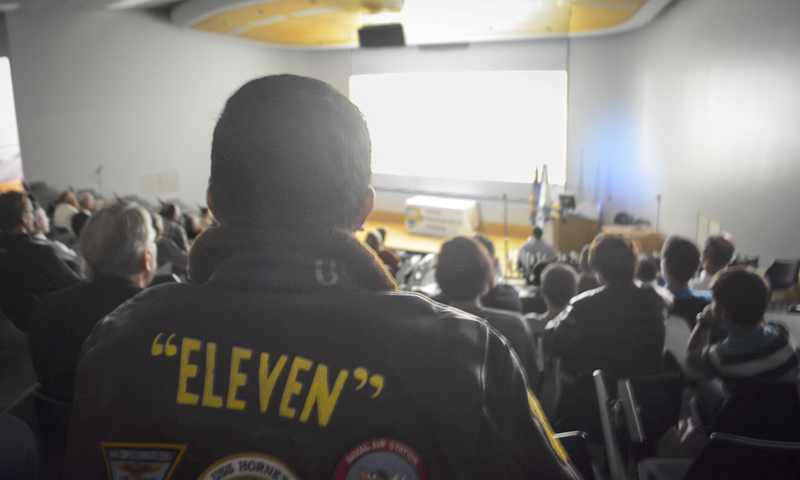 The Naval Postgraduate School and Naval Support Activity Monterey (NSAM) hosted a screening of the documentary film, "Eleven" in Glasgow Hall, Nov. 10. The documentary tells the story of the heroes of Carrier Air Group 11 through the first-hand accounts of 11 Navy veterans recounting their combat tours in the South Pacific on board USS Hornet (CV-12).

"This project started off as just a curiosity, I didn't know what to expect from it. It was just one of those things that felt like the thing to do," said director and producer George Retelas. "I couldn't feel more fulfilled when I discovered, like many folks that will watch this film, that I felt more connected to veterans, and I hope that this film will do that for you."

Three of the 11 veterans featured in the film were present at the screening – Kermit "Tim" Enander, Robert W. J. "Jack" Cocks, and Verg Bloomquist. After receiving thundering applause from those in attendance at the conclusion of the film, the floor was opened up to anyone that had questions for the veterans.

"Was it hard flying planes?" asked a young boy in the audience.

"It's not too difficult flying airplanes because you get caught up in the thought of being part of the greater good," answered Cocks.

Another attendee asked the veterans if what they did in WWII was hard, and if life was better back then or now.

The veterans received several questions from the audience regarding their experiences on the ship and during the war. And their replies were met with smiles, approving nods, handshakes, and even a hug from a young boy that brought Bloomquist to tears.

"This is why I did this, so that young people like you can be here and succeed," said Bloomquist.

Today@NPS showcases some of the speakers, conferences, experiments, lectures, and other events that take place at the Naval Postgraduate School on a daily basis. If you would like more information about any of the highlighted activities please contact the Office of University Communications at pao@nps.edu.
Novermber Title