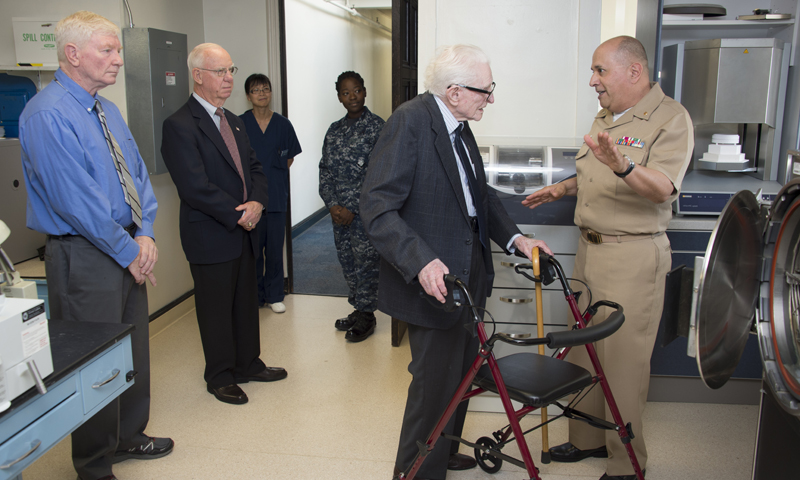 Navy Capt. Philip Vargas, right, demonstrates some of the new technology in the NPS Dental Clinic to retired Navy Capt. Maury Wortham, middle right, during a tour of Herrmann Hall and the clinic, Aug. 24. Wortham, now 100 years old, originally joined the Navy in 1941 as a submariner before transitioning to the dental profession and eventually leading the NPS clinic prior to his retirement in 1977.

“It was a stroll back in time for him … He’s been looking forward to getting back to his old shop,” said Wortham’s son George. “He was the senior dental officer here. He’s got a lot of memories about being here, and this tour brought him back.”

“I’m really happy to see the place making progress,” added Maury Wortham. “It’s much nicer than it was when I was here. This building has been cared for, it’s a first-class building now.”

The Worthams were welcomed to campus by NPS Director of Undersea Warfare retired Rear Adm. Jerry Ellis, pictured second from left, who assisted Vargas with the tour of the clinic and the institution’s iconic administration headquarters.

“He was thrilled to see NPS, and in particular, the dental offices. I asked him about the changes he has seen in his over 100 years of life, particularly in aviation, automobiles, space, Internet, etc., and, what did he considered the greatest? … ‘Improvements in dentistry,’” Ellis quipped. “He was very impressed with what he saw, and was very talkative about the greatness of NPS.”
Nav buttons