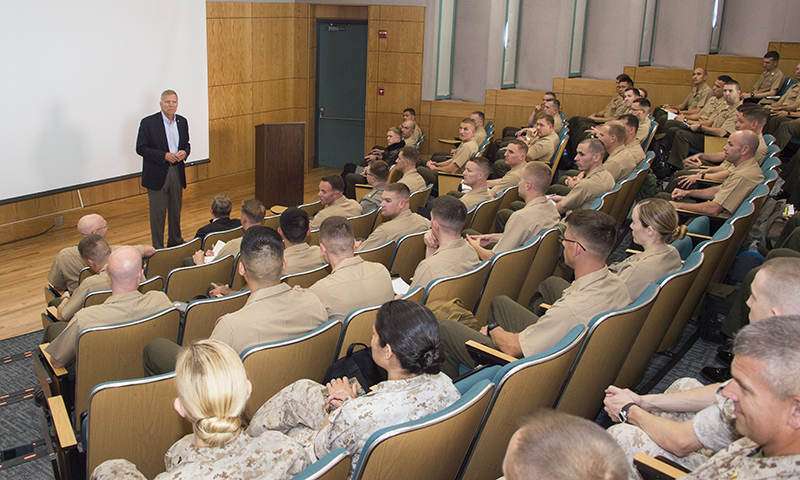 Former Commandant of the Marine Corps, and NPS Hall of Fame alumnus, retired Gen. Michael Hagee addresses Marine Corps students in the Mechanical and Aerospace Engineering Auditorium, Aug. 16. Hagee discussed the value of an NPS education, and encouraged students to overcome the fear of failure by embracing the lessons learned from making mistakes.

“If you don’t have somewhere in the area of 90 percent of your good ideas failing, then you’re not trying hard enough,” said Hagee. “You have to be able to go out and try something, fail, and get up and try again.”

Hagee, a graduate of NPS’ electrical engineering program, was inducted into the university’s Hall of Fame on May 23, 2009. He offered a few thoughts on his own educational experience while at NPS, and encouraged the students to make the most of their short time in Monterey.

“I would argue that a school like this is where you get deep knowledge about a subject. Then you bring your operational and tactical experience together with that, and it will produce innovation,” he said.

“But it depends on you, and how well you do in your particular area when you get back out there in the Marine Corps,” Hagee continued. “In my opinion this is only going to help you. You may not want to, but you’re going to have to leave. And this education here will leave you in good stead.”