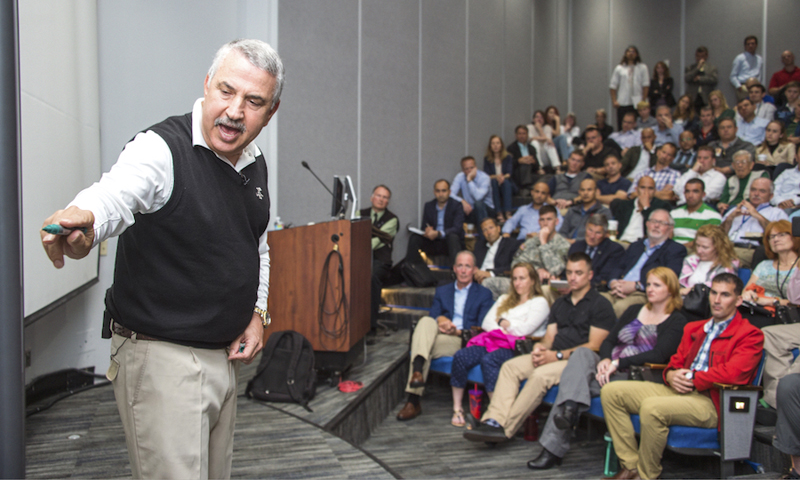 Three-time Pulitzer Prize winning journalist and author Thomas Friedman speaks to a packed auditorium in Ingersoll Hall, June 24. Friedman discussed the various forces shaping the world today and shared insights from his latest book, "Thank You for Being Late: An Optimist's Guide for How to Thrive in the Age of Accelerations."

"I believe we are in the middle of an incredible transition. It is really a time to pause, reflect and to rethink," said Friedman.

Central to Friedman's book are a series of accelerations that he argues are rapidly changing the world we live in – a word divided on the lines of "control and chaos, order and disorder," which is being influenced by markets, Mother Nature and Moore's Law.

"We are actually in the middle of three non-linear accelerations of the three largest forces on the planet, and the three of them are interacting with each other," said Friedman.

Friedman looks back to the year 2007 as an "inflection point" that set the stage for the accelerations that followed.

"[But] right when the world was going through a giant inflection point, we went through the great recession … Our effort to build the social technologies to manage that acceleration went into complete grid lock," said Friedman. "You wonder where Trump and Brexit came from?"

But political gridlock aside, Friedman noted that the integration of sensors, processors, data storage, networks and software into what is now the cloud, with its ability to disguise complexity, have created a pivotal moment in human history.

"This ain't no cloud. This is a supernova. I believe the melding of those five technologies into a world with one touch, is the greatest release of energy, in my opinion, since electricity, and I think in time we will understand, since fire," said Friedman.

"We now, as a collective, are a force of and in nature. The newest geographical era is now being named after us, the Anthropocene, because with these powers, we can actually shape the climate. We've never had these powers before," continued Friedman.

Acknowledging NPS' interest in geopolitics, Friedman also discussed the manner in which accelerations are affecting the geopolitical world.

"Tens of millions of people are trying to get out of the world of disorder and into the world of order and the primary front is the Mediterranean. That is what's going on … They can see our world on an iPhone and they are coming," said Friedman.

Finally, Friedman discussed ethics by asking attendees if "god is in cyberspace" and answering the question with sage advice from his spiritual adviser, who noted that, "If you want god in cyberspace, you have to bring him there."

"We could actually feed, house and clothe every person on the planet," Friedman continued. "We have never stood at this juncture before as a human species, where one of us could kill all of us, and where all of us could fix everything. What will decide that?"