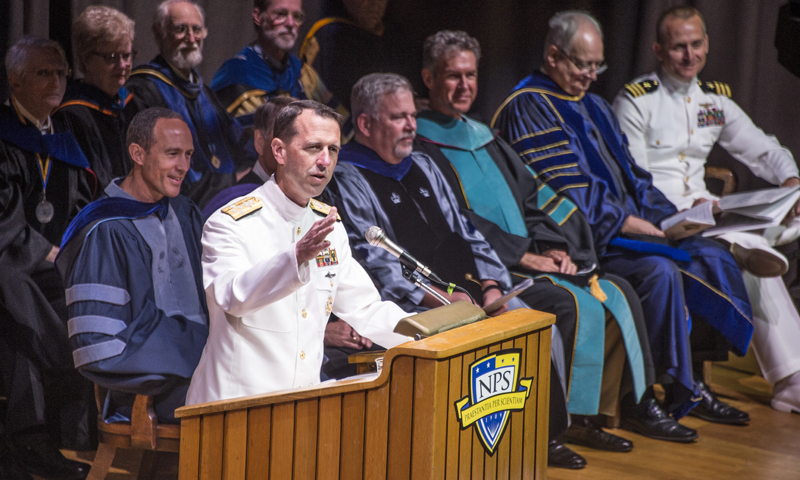 "My preparations for this speech began last weekend … I started by sitting down and reading through your theses," said Richardson. "The sense that comes through them is loud and clear … This class represents a tremendous addition to the strategic arsenal of our nation.

"The other thing that became very clear from your theses, is that the world is getting far more complex and that its pace is picking up," continued Richardson. "Pace is the one word that I use to describe our strategic environment."

Richardson went on to offer several examples of areas experiencing rapid change with important naval implications. He noted tremendous rates of change in the maritime environment, the digital world, and in the development of new technologies.

"This school has prepared you. NPS is ideally situated to make the most of this pace, and to make you individual experts in your fields. By virtue of your contributions, the Navy's performance curve will bend upwards," said Richardson.

Richardson also noted the value that NPS brings to the Navy.

"This faculty has invested deeply in you. When you travel throughout the world, you will carry a piece of them with you," Richardson said. "Today you are all leaving as weapons in our strategic arsenal. You are all strategic assets. You will go off and strengthen our Navy and preserve our maritime superiority."

Richardson assumed the role of Chief of Naval Operations, Sept. 18, 2015. His distinguished career includes, among other assignments, commanding the nuclear attack submarine USS Honolulu (SSN 718). He has also served as Director, Naval Nuclear Propulsion Program, and received the prestigious Vice Adm. James B. Stockdale Inspirational Leadership Award in 2001, among a long list of personal and unit awards.