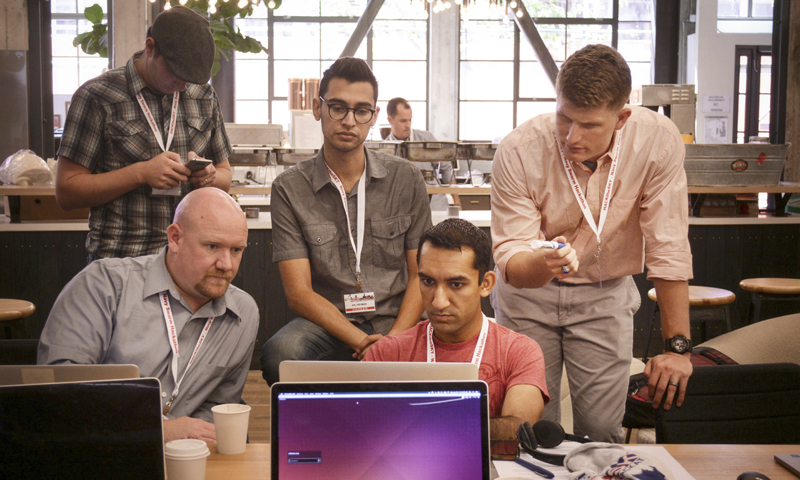 Last year, the Naval Postgraduate School (NPS) set a world record by flying a swarm of 50 autonomous drones all controlled by a single operator. Now, NPS and Defense Innovation Unit Experimental (DIUx) are daring some of the best coders and hackers in Silicon Valley to break into them.

The Navy's "#HacktheSky" hackathon, held June 25-26 at innovation hub Galvanize in San Francisco, California, brought together an array of hackers, cyber experts, Silicon Valley tech representatives, and data scientists to find the vulnerabilities in the drones' code. Ultimately, the purpose of the hackathon is to improve software, innovate upon technology created at NPS for unmanned systems, and foster stronger relationships between government, industry and Silicon Valley's cyber experts.

"Right now, the commercial drone sector is six generations ahead of what the Department of the Navy is currently testing, because our cumbersome processes and requirements were designed for an era of manned aircraft and big expensive acquisitions," said Dr. Maura Sullivan, Chief of Strategy and Innovation for the U.S. Navy. "We are still attempting to apply the rules for physical systems to a digital world, but this event today is one of the ways we are looking to break down that paradigm."

"A big technology firm like Tesla creates new models annually, or Apple for example, comes out with a new phone every year," added Navy Cmdr. Zachary Staples, Director of NPS' Center for Cyber Warfare. "But the Navy is still buying software based on an acquisition system that plans about five to seven years in advance."

With technology advancing every day, becoming more sophisticated, user friendly and available to the masses, an outdated system is not conducive to an ever-evolving Navy.

"One of the main things that #HacktheSky is really about, aside from all the fun and workshops, is that we have to demonstrate to our leadership that we can devise methodologies for speed," said Staples. "We need to get everybody in here to walk out at the end of this event, whether you're military or not, thinking that there should be a way for us to make software faster than what the Navy is doing right now."

There are limitations to what can be accomplished in a weekend, but experience shows that innovation can be nurtured by getting the right people together in one room.

"Spend the next two days moving beyond the apparent soundness of conventional wisdom, and working together to build toward the future that is already here," said Sullivan.

Teams had two full days to crack into the drones' code based on multiple scenarios, with prizes awarded to the teams with the most success. But beyond a few accolades and awards, the Navy walks away with some critical feedback from the hacker community, and invaluable newfound knowledge about its swarming capabilities.