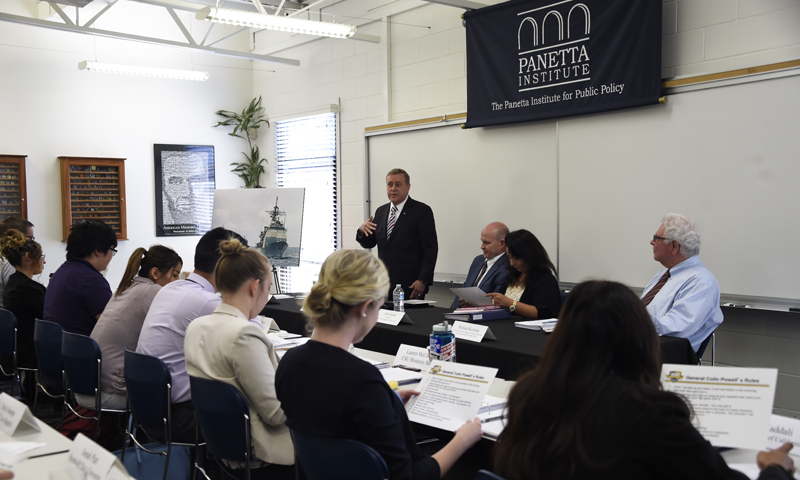 NPS President retired Vice Adm. Ronald A. Route speaks to student leaders during a panel on leadership in education at the Panetta Institute at nearby California State University Monterey Bay, June 15. The panel was held as part of a weeklong leadership seminar for student-body presidents of universities throughout California.

Route shared a personal favorite, retired Army Gen. and former Secretary of State Colin Powell's 13 rules to live by popularized in his book, "It Worked for Me: In Life and Leadership." Joining Route on the panel was Monterey Peninsula College Superintendent Dr. Walter Tribley, who encouraged students to continue learning because it will open unforeseen doors on their personal career paths.

"While I was on my path, other opportunities came my way. I took advantage of as much education as I could," said Tribley. "There is no end to it, it's a force multiplier."

Uriah Sanders, President of the Associated Students Incorporated (ASI) at Cal Poly Pomona, said he appreciated the diversity of perspectives from the panelists, representing three different institutions of higher learning.

"We have heard speakers from the military, sports and campus, and even had a lecture from the former Secretary of Defense Leon Panetta," said Sanders. "It has been a very intensive learning experience with different perspectives on leadership strategy."

ASI Cal State San Marcos President Collin Bogie said he looks forward to applying the education from this week of training to his newly-established chapter.

"It is rare to be in a setting with different leadership personalities," said Bogie. "It has been empowering, I feel I can accomplish anything now that we are developing our leadership roles."