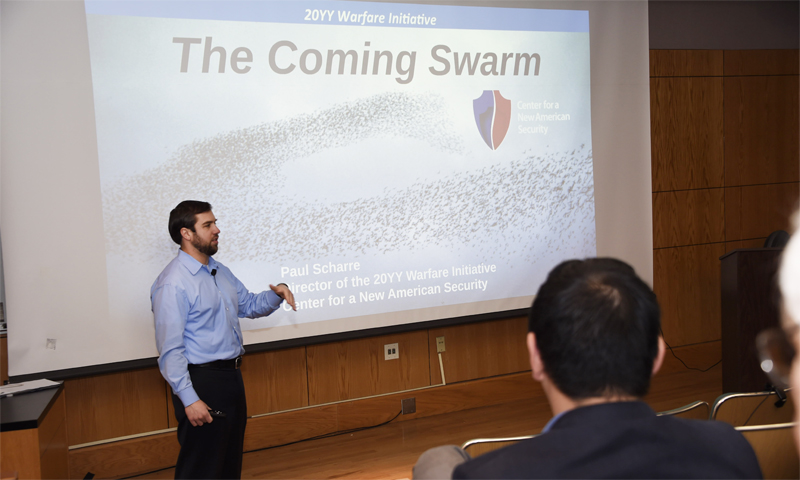 Paul Scharre, a Fellow with the Center for a New American Security (CNAS), speaks during CRUSER's inaugural colloquium series in the Mechanical and Aerospace Engineering Auditorium, Jan. 12. CRUSER, or the Consortium for Robotics and Unmanned Systems Education and Research, launched the series to bring experts onto campus to encourage intellectual conversations in the areas of robotics and unmanned systems.

Scharre, a former U.S. Army Special Forces team leader, is the director of the 20YY Warfare Initiative at CNAS. His presentation, titled "The Coming Swarm," offered insight into the dynamic, modern battlefield and the advantages associated with swarm systems.

"Swarm systems allow us to be everywhere and nowhere at the same time," he said. "Systems that cooperate more intelligently help us to operate at greater speeds. [Today], we rely on silver bullets to get the job done, but in the future we need not rely on them."

"This technology is begging to be adopted. What we need is a czar in the Navy like Billy Mitchell … he was a great naval hero because he forced the Navy to create room for Naval aviation," said Hughes. "We need a czar to bring along unmanned systems as well."