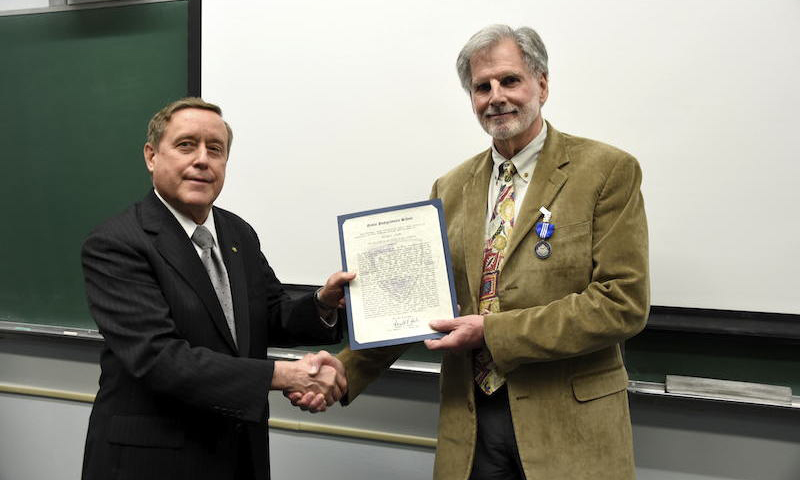 Distinguished Professor of Physics Dr. Bill Colson, right, is presented with the Navy Superior Civilian Service Award from NPS President retired Vice Adm. Ronald A. Route, Jan. 17. Colson is widely recognized as a pioneer in the theory of free electron lasers (FEL), creating an extensive suite of simulation models that have been used to guide FEL development throughout the world.

"It is great to honor a national treasure, Dr. Colson has been a great contributor here at NPS," said Route. "We like to talk about our 'Big Ideas' … Dr. Colson's lecture about communication with exo-planets is certainly one of the biggest, by an order of magnitude."

During Colson's 26-year tenure at NPS, he advised on more than 80 master and Ph.D. studies, with some of his former students rising through the ranks to lead the Navy's current directed energy efforts.

"This is the best place I have ever worked," said Colson. "The department has always been friendly, supportive and inviting. I'm 71 now, and could have quit by now, but working here with all of you has kept me around. And I will still be around in a smaller capacity for as long as you all can stand me."

While his guidance may remain on campus, Colson's tenure with the university has already been more than productive. In addition to his supervision on student theses, Colson has served as the principle investigator on more than 70 research contracts, published more than 150 research papers, earned five patents, and gave more than 80 invited lectures.