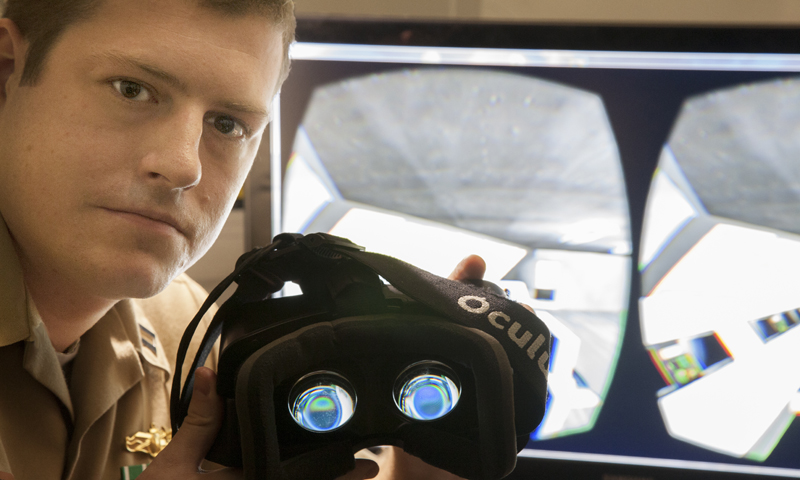 NPS computer science student Lt. Brendan Geoghegan demonstrates the Oculus Rift Virtual Reality (VR) head-mounted display he's using as a tool to determine the viability of a novel operational view of the bridge onboard U.S. Navy warships. The display augments a conning officer's visual field with an overlay of critical navigational information (CNI) that is typically relayed via the navigation officer's voice.

"As part of phase one of my thesis, we traveled to the Surface Warfare Officers (SWO) School Command in Newport, Rhode Island, to conduct the experiments with 12 instructors who are seasoned ship drivers, subject matter experts in navigation and executing ship maneuvering. I used the Oculus Rift headset, for which I invested extensive efforts to recreate ship navigation scenarios that mirror situations to avoid shore hazards and other vessels," said Geoghegan.

He then assembled a pool of 13 SWO volunteers from across NPS' campus to conduct the same set of experiments. These participants were also seasoned Navy ship drivers, whose average experience is seven years. The advanced high-definition VR headset is only used as an augmentation to the conning officer in his study.

"Each of my subjects performed tracking response commands broken down into three experimental sessions – one with a navigation evaluator, one with a navigation evaluator and a head's up display, and one with just the head's up display. I now have over 18 hours of simulation data as well as a set of questionnaires filled by each subject, that will be analyzed as a part of my thesis," he explained.

Geoghegan's thesis advisor Research Associate Professor Amela Sadagic oversaw and supported the procedures during each test session. Both emphasize that the results from the study could benefit the Navy in several ways.

"In the final analysis, the solutions being suggested by Lt. Geoghegan may mean savings through reduction of human errors, increased precision in the execution of ship navigation, and a potential savings through reduced manning," said Sadagic. "This line of work has instigated a lot of interest among our students – several of them currently pursue their thesis topics using the same headset. Additionally, the equipment and infrastructure acquired while working on this effort have been already used to enrich the courses taught in the computer science and MOVES curricula."